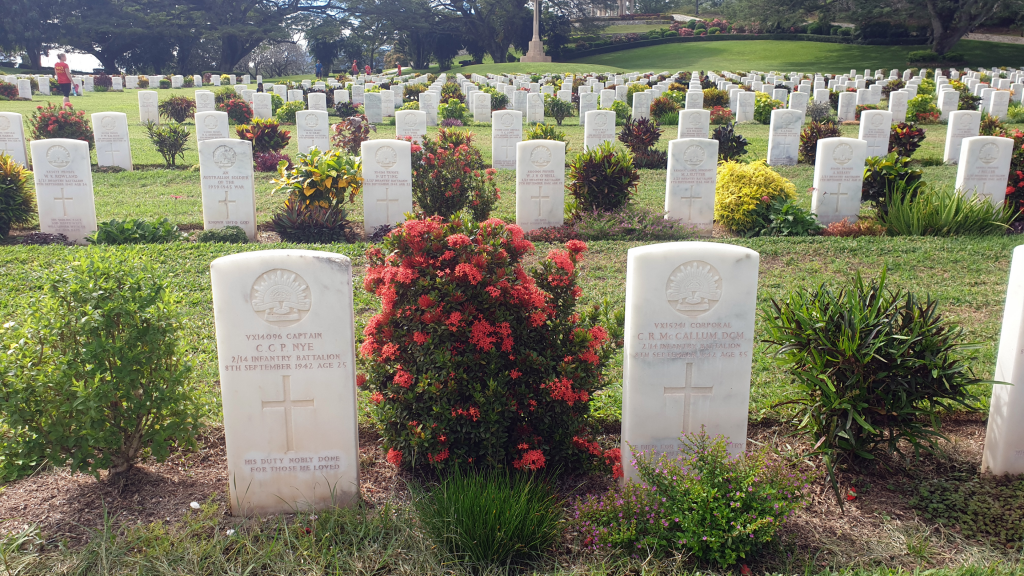 12 months ago in France, I wrote a blog called “Courage circa 1918”. As I recently hiked the Kokoda track I was reminded of this story about Walter Brown and the traits Aussie soldiers on the track had in common with the ANZAC’s in the trenches.

While the Western Front in World War One and the hot jungles of Papua New Guinea were very different places; it was sobering to consider the similarities in the ANZAC’s that fought at each place. At the Isurava Memorial today the four words courage, endurance, mateship, and sacrifice are etched into stone and they absolutely sum up both generations of Diggers. It was these four words and the story of Corporal Charlie McCallum that kept coming back to me as I walked the track.

I first read about Charlie McCallum the night before I started the trek across Kokoda and was privileged to walk the ground he did. Charlie was a magnificent example of not just courage but also endurance, mateship, and sacrifice. His story is worth telling again, as he is a true Australian hero.

VX15241 Corporal Charlie Reginald McCallum
As the battle of Isurava on the Kokoda Track and the fighting with the Japanese intensified on the 29 August 1942, the order was given for the 2/14 Infantry Battalion to withdraw. The Japanese had attacked with such ferocity, 12 Platoon, B Company became overwhelmed and to break contact from the Japanese would have certainly meant taking many casualties.

It was in these frantic moments that a wounded Corporal Charlie McCallum took the initiative and put it all on the line for his mates. Calmly standing his ground, with a Bren gun in his right hand and a Thompson sub-machine gun from a wounded friend in the other, Charlie singlehandedly defended the Platoon position against waves of advancing enemy soldiers while his mates safely withdrew.

I read that in the heat of battle, an extraordinarily calm Charles was changing magazines on the Bren gun while fighting with the Thompson and at one point the enemy got so close that a Japanese soldier pulled a piece of equipment of his belt. When his Platoon retired to safety and he himself fell back; it is said that up to 40 enemy soldiers lay in front of him on the battlefield.

Although recommended for a Victoria Cross for his courage in the face of the enemy, Charles received a Distinguished Conduct Medal (DCM). It is said that this was only because Private Bruce Kingsbury, also from the 2/14 Battalion was awarded a VC for bravery and the higher command did not want to award two in the same battle.

Charlie McCallum’s citation reads:
‘At all times in action, McCallum was admirably calm and steady. On this occasion, his utter disregard for his own safety and his example of devotion to duty and magnificent courage was an inspiration to all our troops in the area. His gallant stand and the number of casualties he alone inflicted checked the enemy’s advance and allowed the withdrawal to proceed unhindered and without loss’.
​
It is hard to comprehend the bravery Charlie displayed and inspired in those around him on the Track. It is also clear that the courage Charlie displayed at Isurava was not a single event. On the 8 September 1942, just one week later, at Brigade Hill, Charlie McCallum was killed in action.